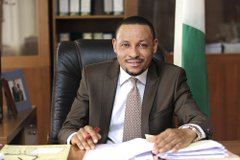 The Chairman of the Code of Conduct Tribunal (CCT) Umar Danladi, who was caught on camera assaulting a security guard has released a statement with the usage of “BIAFRAN Boys”

Flashback: In a five-minute video sighted by MANDY NEWS, Umar Danladi was seen slapping and kicking an unidentified security guard at Banex Plaza Abuja, while some law enforcement officers attached to him were trying to restrain him from attacking the guard.

What he said: Despite video evidence, Nigeria’s Code of Conduct Tribunal chairman denies assaulting the security guard, he claimed it was him that was assaulted.

Hundreds Gather In UK To Send Buhari Back To Nigeria (Photos)