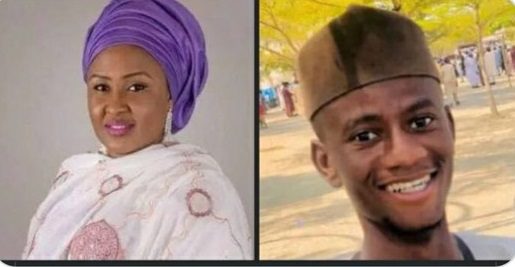 A young man from northern Nigeria, Aminu Adamu Shalele, was arrested for posting about Aisha Buhari’s transformation on social media.

A young man from northern Nigeria, Aminu Adamu Shalele, was arrested for posting about Aisha Buhari’s transformation on social media.

Like the saying goes, “If you can’t do the time, don’t do the crime.” If one cannot bear the repercussions of their behavior, they should refrain from doing it.

We often urge our readers, especially those in Nigeria, to exercise caution when posting or communicating on social media.

Every movie we watched growing up in Nigeria would end with a line like, “Anything you say or do will be used against you in a court of law.”

That is how we learned to be very careful when criticizing anyone, especially government officials.

According to comedian I Go Dye, Nigerians would support you when you criticize the government, but they will turn against you if you get into problems or the government comes after you.

That is the case of Aminu Adamu Muhammed, who was taken away from the Federal University of Dutse on November 8, 2022, by suspected security operatives from Aso Rock.

Sometimes in June, a young man by the name of Aminu Adamu Shalele on Twitter posted a tweet with images of the first lady of Nigeria and the following message:

However according to several people the translation of his tweet: “Hajiya you appear to be feeding fat on the funds of the masses (talakawa’ with this your new size”

Another translation sighted by mandynews.com also says, “The poor people’s money has been eated”

Read below what Aminu Adamu Muhammed people are saying.

“Aminu Adamu Muhammad, who was allegedly abducted from Dutse Federal University by a security officer, is the subject of our quest for justice. Aminu, a 23-year-old student in his final year of management (environment and poison) at FUD University in Jigawa State, was detained by security personnel as a result of his speech to President Aisha Buhari’s wife.

Aminu’s father received the shocking news of his son’s disappearance when a colleague from the university called to say Aminu hadn’t been seen for five days at school.

According to a source from the school, Aminu was taken into custody at 12 o’clock using the authority of tuwo, who are purportedly security officers.

Aminu claimed that after receiving nad’in taburma from security personnel and being physically assaulted in front of the president’s wife to vent his fury, he was brought to an unidentified location in Abuja and not transferred to the police station. Before he was able to reach his father, retired state employee Adamu Shalele Azare, he had to go without for a week.

Aminu’s father has expressed his sorrow about the caliber of security personnel and the president’s wife’s improper behavior.

Here is Aminu Adamu Shalele’s speech on social media on Tweeter sometime since June during ASUU strike, which gives confirmation of his allegations.

Aminu has written that ( “SU MAMA, THE POOR PEOPLE’S MONEY HAS BEEN EATED”wink This information was from when he was in school and included pictures of the president’s wife in 2015 and today’s wife who was full after Baba finished farming.

We are calling for justice to him Aminu Matashi is an environmentalist who will write his final exam on 5th December. Please we are pleading with the Muslim community to put Aminu in their prayers, may Allah make him free.”